I’ve been forecasting with some level of activity for over 2 years now, so I’m overdue for a retrospective.[1]

I started forecasting fairly actively on Metaculus in 2020 when I got interested due to COVID forecasting, though recently I have mostly just been predicting on particularly interesting questions every once in a while. I’m currently 9th on the overall leaderboard, due to me trying to predict on ~every question for about a year.

I might be a little underconfident? The blue rectangle in each bin represents the 50% confidence interval, and it looks like about 11 of the 20 rectangles contain the bin.

I’m guessing the spike at 0-5% surprisal is mostly due to the cases where the value was effectively known before the question closed.

On the other hand, the spike at 95-100% surprisal is conveying something real: my tails are, on average, not long enough. This is an interesting contrast to my binary predictions where ~all my 0-5% and 95-100% predictions look to have been right. Forming calibrated continuous distributions is tricky; in Metaculus’ interface it might be wise to add high variance low weight components, to generally account for unknown unknowns.

I’m not sure what’s going on with the drop at 5-10%, but otherwise this looks pretty good and the overall average surprisal of 46% seems decent.

My average log score (higher is better) vs. the community predictions are as follows :

It’s hard to really know what to make of these because:

Given (2) above, I’m pretty happy about performing approximately the same as the community on questions evaluated at close time.

GJOpen was the first platform I predicted on after reading Superforecasting in ~2018, but I was fairly inactive for a while. I was a bit more active for about a year in 2020-2021. 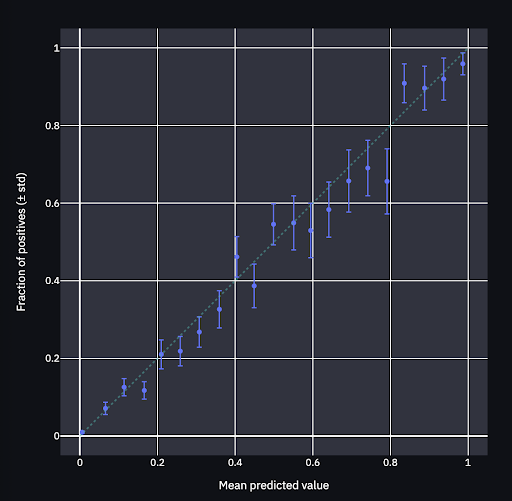 This overall looks pretty good, but perhaps I have a bit of a bias toward predicting events are more likely to occur than they actually are?

My overall Brier score is 0.23 vs. a median of 0.301 from other predictors (lower is better); I’m pretty happy about this overall. The difference is a bit inflated as I sometimes selected questions based on the community seeming very wrong, after having received tips from other forecasters. 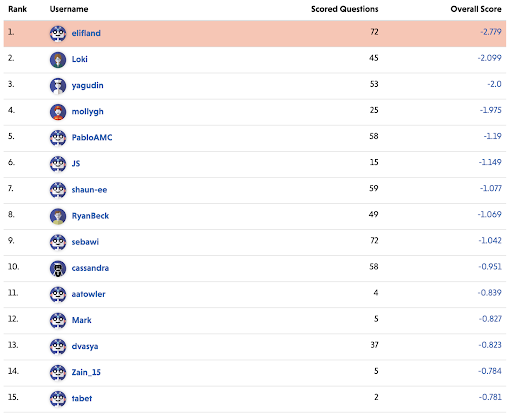 While I’m pretty happy about being first here given that there were ~50 pro forecasters during the 2021 season:

Overall I’m doing pretty well; I’m 13th on the profit leaderboard and think I have one of the highest percentage returns. I’ve turned M$1,000 into M$8,420 so far.

My biggest (resolved) profits thus far come from correcting NBA markets to real money betting odds, correcting a high school science bowl market that was for some reason highly traded and off, and betting against Carrick Flynn winning the Democratic primary (this feels like the most real epistemic win).

I got 70th/146 forecasters on Arising Intelligence 2022 on Hypermind, slightly above average despite missing badly on 2 of the questions (the crowd also missed very badly). Will be interesting to see how I do in 2023-2025; my updated forecasts are here, and my previous round of forecasts is here.

I’m in 15th place overall on the overall leaderboard for the Forecasting AI Progress tournament, which seems not great relative to the number of predictors per question. As I’ve previously described, the tournament felt like it was mostly testing the skill of forming continuous distributions from trend extrapolation. I believe I made a basic error of not accounting for seasonality when extrapolating ArXiv paper counts in at least one of the rounds.

I (and the crowd) badly underestimated progress on MATH and MMLU. For more details on the mistake, see Jacob Steinhardt’s blog post and my clarifying comment.

A mistake I made applicable to both benchmarks was underestimating the low-hanging fruits of improvement that were likely to be picked following the surge of interest in LMs after GPT-3.

Additionally, I didn’t respect the base rate for fast progress on new NLP benchmarks enough. Owain Evans comments on this here; I haven’t seen a thorough analysis done but my guess is that since transformers have been introduced progress is often very fast after the release of a benchmark; see e.g. SuperGLUE having human performance beaten in ~1.5 years.

I made a few additional mistakes in the MATH case:

My updated predictions on these questions can be found here. I’ve also updated from median 2047 to 2033 on AI winning an IMO gold medal.

On AGI/TAI timelines, I still feel somewhat skeptical that (approximately) GPT-n will scale to AGI but my skepticism has reduced a bit, and I think the MATH result indicates a speedup for this pathway. I should also update a bit on the meta level regarding the reliability of my skepticisms. Before my TAI timelines were roughly similar to Holden’s here: “more than a 10% chance we'll see transformative AI within 15 years (by 2036); a ~50% chance we'll see it within 40 years (by 2060); and a ~2/3 chance we'll see it this century (by 2100)”. I’m now at ~20% by 2036; my median is now ~2050 though still with a fat right tail.

My timelines shortening should also increase my p(AI doom by 2100) a bit, though I’m still working out my views here. I’m guessing I’ll land somewhere between 20 and 60%.

I’m also generally confused about how to translate progress on tangible benchmarks like MATH into updated bottom line forecasts. My current method feels very brittle in that I’m making some intuitive adjustment based on “surprisingness”, but I don’t have a clear model of which capabilities are missing and what would make me update on their feasibility. I’m working on building up a more robust model of AI progress to get better at this, but it will probably take a little while. My sense is that very few people have anything close to a good enough model here to reliably differentiate how to update on new evidence.

I consistently underestimated future COVID waves after the initial one, and especially after much of the population was vaccinated and/or naturally immune; I had a naive model of how herd immunity would work and failed to account enough for substantially increased transmission, re-infections, vaccine escape, etc. I probably would have done well to study past pandemics more in depth and take lessons from them. I should also perhaps generally be skeptical of simplistic models like “we’ll have herd immunity and things will peter out indefinitely”.

For example, on When will the US pass 1 million cumulative deaths from COVID-19? I predicted as far to the right edge as I was allowed to, then lost 212 points. I was very skeptical deaths would continue this rapidly after vaccinations.

Some quick intuitions and hot takes I have based on my time forecasting include:

Thanks to Nuño Sempere and Molly Hickman for feedback.

Enter your email
Subscribe
Charlotte Siegmann and I just published a post on AI Strategy Nearcasting: "trying to answer key strategic questions about transformative AI, under the assumption that key events will happen in a world that is otherwise relatively similar to today's". In particular, we wrote up our thoughts on how we might
I've written a review of Joe Carlsmith's report Is Power-Seeking AI an Existential Risk? I highly recommend the report and previous reviews for those interested in getting a better understanding of considerations around AI x-risk. I'll excerpt a few portions below. Thinking about reaching goal states rather than avoiding catastrophe
Introduction In my review of What We Owe The Future (WWOTF), I wrote: Finally, I’ve updated some based on my experience with Samotsvety forecasters when discussing AI risk… When we discussed the report on power-seeking AI, I expected tons of skepticism but in fact almost all forecasters seemed to